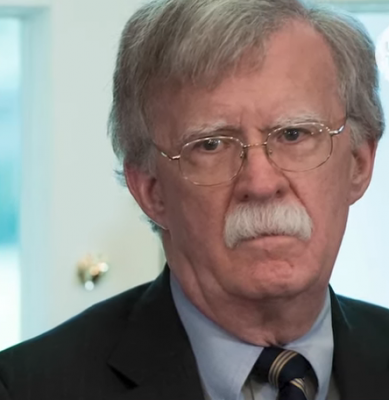 Caroline Glick, an American-Israeli journalist, was the deputy managing editor of the Jerusalem Post. She was an officer in the IDF for five years, and she also served as assistant foreign policy advisor to Prime Minister Benjamin Netanyahu. She has a few choice things to say about John Bolton:

…When Bolton ran a quixotic campaign in the Republican presidential primaries in 2012, many of his supporters hoped that at a minimum his run would help to position him as the Republican Party’s national security standard-bearer. And when President Trump appointed Bolton to serve as his national security adviser in 2018, many were certain that working together, the two men would take America’s superpower stature to new heights.

Alas, the two men’s common sense of the general thrust of US national security policy did not translate into a good working relationship. And truth be told, the person most responsible for their inability to work together was Bolton, not Trump….

I met with Bolton during his tenure at the White House when he came to Jerusalem…. As he does in his book, which is due to be released this week, in our meetings Bolton complained that Trump has no foreign policy strategy.

But this is simply not true. The consistency of Trump’s foreign policies across the board make clear that the President has a clear and well thought out strategic vision and operational perspective.

Trump’s strategic goal is to make America stronger – first and foremost at home. Trump ventures into the world not to deter enemies or embrace allies per se. He goes out into the world to rebuild America’s industrial base by bringing back the factories and firms that decamped to China and Mexico and other foreign lands over the past 30 years and taken millions of American jobs with them. Trump doesn’t care about arms races for their own sakes. He cares about them because he wants America to be number one and because he wants more defense industries hiring more Americans in America….

Bolton never understood what Trump was doing. And rather respect the businessman who came out of his gilded tower in Manhattan to run for the presidency and won, rather than try to understand and align his thinking with his boss, Bolton belittled Trump and his achievements. Towards the end of his tenure at the White House, Bolton seemed to reject Trump’s very right to see the world in his own way.

The big break for Bolton, it seems, came on June 20, 2019. That day Iran’s Revolutionary Guards shot down a US drone over the Straits of Hormuz.

Initially, Trump heeded the counsel of Secretary of State Mike Pompeo and Bolton and ordered a retaliatory strike against Iran. But at the last moment, Trump changed his mind and canceled the strike. When Bolton arrived in Israel several days later, he was beside himself with rage.

…Bolton refused to see the forest from the trees. True, Trump refused to launch a direct retaliatory strike over the drone attack, and from a tit-for-tat perspective, his inaction may have looked like a sign of weakness. But it is inarguable that by June 2019, Trump’s policy towards Iran was lightyears away from his predecessors’ policies.

George W. Bush gave Iran a free pass for masterminding the deaths of hundreds of US forces in Iraq and Afghanistan. Barack Obama legitimized Iran’s nuclear weapons program and transferred billions to the ayatollahs.

Trump abandoned Obama’s nuclear deal and instituted the harshest economic sanctions on Iran ever while supporting Israel’s actions against Iran’s clients in Syria.

At base, Bolton’s conduct, both during his White House tenure and since his departure, is the behavior of a man who was unable to accept that he was an adviser to the president, not the president.

Rather than embrace the opportunity Trump gave him to have a seat at the table of the world’s most powerful leader, Bolton begrudged Trump’s position at the head of the table. Since leaving office, Bolton has dedicated himself to undermining the president whose only sin was failing to see the world through John Bolton’s eyes.

KT McFarland: Trump and Bolton – this is when I knew it wasn’t going to end well

This section is for comments from tammybruce.com's community of registered readers. Please don't assume that Tammy agrees with or endorses any particular comment just because she lets it stand.
6 Comments | Leave a comment
Click here to cancel reply.