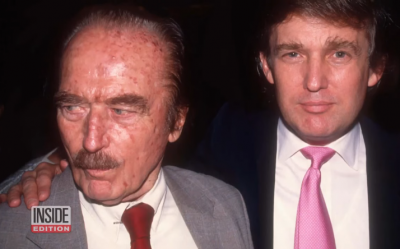 Here is the account from Rabbi Shmuel Wagner, now living in Israel, the son of Rabbi Yisroel Wagner, who, in 1956, met with Fred Trump.

Note: “shul” is Yiddish for “synagogue.”

….Rabbi Yisroel Wagner survived the Holocaust and made his way to Bolivia, in South America, where he served as the rav of a Jewish community. In 1950, he and his wife moved to California and a few years later to New York, where he became a rabbi in a residential area of Brooklyn, near Brighton Beach. Fred Trump owned 31 buildings in the area, with many Jewish tenants….Reb Shmuel recalls:…the shul operated in the parking garage of one of the buildings, and began with thirty members, but it experienced tremendous growth in just a few years, to the point that it came to serve hundreds of families….

Eventually, the shul’s membership grew to the point that the garage facility was no longer large enough to house the congregation. “My father had an idea,” Reb Shmuel recalls. “He offered to approach Fred Trump, the millionaire landlord, although he didn’t know him personally. He hoped that he could convince the man to supply an adequate space for the synagogue. He knew that Fred Trump was a generous soul, a man of faith, and he was likely to relate to the request.”….Trump was very moved by the proposed idea and he proceeded to donate a piece of real estate at 723 Avenue Z, which became the Beach Haven Jewish Center, and is open and active to this very day, offering programs for youth and the elderly….

According to Reb Shmuel, not only did Fred Trump donate the plot of land where the shul was built and cover most of the expense of the construction, but he also attended the ceremony in 1956 at which the cornerstone was laid. “Fred was very moved by my father’s speech at the ceremony. He was highly impressed, and he became my father’s close friend.” Over time, Fred Trump’s donations grew progressively more generous. Many times, Rabbi Wagner would tell him about various Jewish families in the area who were poor and needy, and he would give large sums to help them out as well….