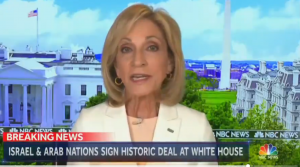 The peace deal between Israel – UAE and Israel – Bahrain is named the ‘Abraham Accords,’ after the Biblical Abraham, who had two sons, Isaac and Ishmael. Abraham, Isaac and Jacob are considered the Three Patriarchs of the Jewish people, while Ishmael is the progenitor of the Arabs.

Despite what all the miserable sufferers of TDS claim, the Abraham Accords is bringing peace to the Middle East.

On “NBC Nightly News,” however, anchor Lester Holt began the segment alluding to Mitchell’s reporting, saying that while the agreement will “normalize nations and bring them closer together,” a “broader Middle East peace is still an elusive goal.”….

She continued, “But today’s agreements open the doors for trade, travel, and tourism. But it is not Middle East peace.”….

“And the president can portray himself as a peacemaker, he says worthy of a Nobel Prize, 49 days before the election,” Mitchell concluded her report.

Bitter lefty Andrea Mitchell decries the landmark Middle East peace deal signed at the White House today. 'But today's agreements open the doors for trade, travel, and tourism. But it is not Middle East peace!'
Adding: a peace prize was something only Trump thinks he should get pic.twitter.com/kqneAICdaR

And good for Jared Kushner for canceling his interview with Mitchell.

How @jaredkushner Proved His Critics Wrong
Despite the commentariat’s assumption that he was an idiot, the president’s son-in-law has successfully nudged the tectonic plates of Middle East politics https://t.co/JJiAWsEJpH via @RichLowry HT @newtgingrich