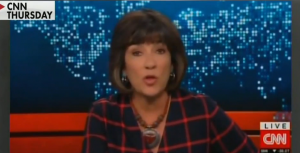 I would love to ask my mother’s cousin, and her cousin’s husband and their three children, what they thought of Amanpour’s beyond-the-pale outrageous remarks.

However, I can’t. They’re all dead.

When the Nazis entered Lithuania during WWII, they rounded up the Jews of Kovno, took them to the outlying forests, and thousands were executed by machine gun fire.

But, you know, Orange Man Bad.

CNN anchor Christiane Amanpour apologized during her show Monday for comments she made last week comparing the actions of US President Donald Trump to the Kristallnacht Nazi pogroms.

“I observed the 82nd anniversary of Kristallnacht, as I often do. It is the event that began the horrors of the Holocaust. I also noted President Trump’s attacks on history, facts, knowledge, and truth,” Amanpour said, reflecting on the comparison she had made during her previous show on Thursday that sparked uproar in Israel and from Jewish groups in the US.

“I should not have juxtaposed the two thoughts. Hitler and his evils stand alone, of course, in history,” she continued. “I regret any pain my statement may have caused.”

“My point was to say how democracy can potentially slip away, and how we must always zealously guard our democratic values,” Amanpour added….