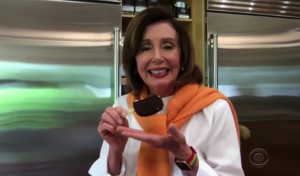 Far-Left Dems blame Pelosi for their eroded majority in the House.

Gosh, don’t you just love the smell of Dem infighting in the morning? 🙂

Progressive groups slammed House Speaker Nancy Pelosi in their post-mortem on the 2020 election for “showing off” her expensive freezers full of premium Jeni’s ice cream during an interview at the beginning of the coronavirus pandemic.

“When Democratic leaders make unforced errors like showing off two sub-zero freezers full of ice cream on national television or cozy up with Wall Street executives and corporate lobbyists while Trump tells voters we are the party of the swamp, it is not surprising that we lose,” reads the memo, which was sent by groups including Justice Democrats and the Sunrise Movement….

After today, Small Business workers and employees aren’t going to get a paycheck to feed their families because of the Democrats.

But here’s a video Nancy Pelosi’s team put out of her showcasing a (very fancy) freezer full of ice cream and a house full of chocolate. pic.twitter.com/265mKC7q9v